A Dikshunary or What Lots of Folks Really Think of Adjuncts

via The Adjunked Professor’s About

Tomorrow the Nassau CC Trustees will meet and cast their votes for two motions. One is to approve a contract for full- time faculty that appears to have tenure elimination by attrition written between the lines. The other motion is to break the AFA union by firing strikers and stripping the seniority of those not fired.

This post discusses how tenure is being phased out with the new contract for full-timers. I will be in class most of tomorrow and past meetings have lasted until 11:00 pm. so I will briefly post the night’s outcomes around midnight.Calls for union membership to mob the meeting have been put outrepeatedly. I hope they show.

Contract Is A Blueprint for Tenure’s Slow Phase-out 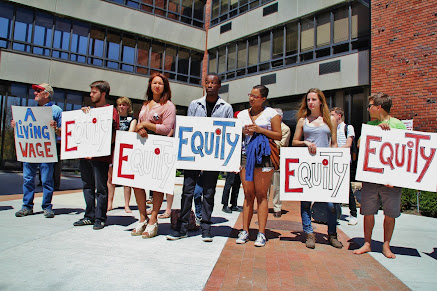 A congressman from just north of the Bay area calls for contingent faculty to speak up | CPFA Forum Blog.

check out  PKK’s list of what this almost-was-alt.ac can do for you…or what you or other humanities majors plotting escapes from academia could do…beats being a Mechanical Turk…

via for hire | pan kisses kafka.

…weekly round-up for #adjuncts, so maybe we’ll make it a regular Adjunctiverse feature…or at least try to remember to send it on. Your own subscription is the only way to be sure.

Friends of Pan Kisses Kafka Guest Blog: Tales from the Trenches I

Win, win, win: new feature Friends of Pan Kisses Kafka (FoPKK), kicking off with a great, don’t miss read. *and* a Call for Submissions —and if you have a story to tell about your experience in academia, I will pay you for yours. Email me or leave a 100-word pitch in the comments.

We Are Worth More

The intersection between precariat protests by low-wage workers and close analysis of the National Labor Relations Act is an important lesson that adjunct academic labor should not ignore. There is a place and a clear purpose for us in this approach. Now to add this blog to the overflowing feed reader and look for more articles by Jack Metzgar to read and, of course, share.

Last month a few hundred retail and fast-food workers, from places like Sears, Dunkin’ Donuts, and McDonald’s, walked off their jobs for a rally in downtown Chicago.   Carrying signs saying “Fight for 15” (or “Lucha Por 15”) and “We Are Worth More,” these workers make $9 or $10 an hour, at best, and they figure they’re worth at least $15.

A one-shift walk-out and protest by a few hundred out of the thousands of such workers in the Chicago Loop and along Michigan Avenue’s Magnificent Mile cannot have the economic impact of a traditional strike – one that shuts down an entire workplace or industry for an extended period of time and, therefore, can bend an employer’s will.   And these workers’ chances of getting $15 an hour any time soon are worse than slim.   This “job action,” bolstered by community supporters organized by Action Now and with help from Service…

As you prepare yourself for whatever Mayday activities you have planned, please keep in mind some of the recent adcon news. This will allow you to focus.

First on my list has to be a story regarding CUNY adjuncts being excluded from an important PSC vote.

The Professional Staff Congress, PSC, is the AFT (and AAUP) affiliated union representation thousands of faculty, full-and-part time, at City University of New York’s multiple sites. In the case at hand, at least some adjuncts objected to the exclusion, finding it “surreal” “grotesque” and “a disgrace.”

In response, PSC’s President, Barbara Bowen, called the report in which these disappointments appeared, “very irresponsible.”

Very emotional. Please read. It may ramp up your energy, which you will need on Mayday, because after all, you’re teaching four or five or whatever courses, at the end of the semester, at a couple or three campuses, and you have a gigantic stack of assignments that’s blocking the view of your neighbor’s trash-filled backyard (it’s also an adjunct household), and so-forth.

So you need some energy. Go ahead, admit it. It’s not a sign of weakness to admit you feel overwhelmed.

Need more energy Ok, how about abunch of stuff about cutting adjunct hours in, New Jersey, in Virginia (andhere), in Missouri, in New Hampshire, in Taiwan…

Ok, back in the U.S. there’s more on adjuncts being newly and more harshly hours-capped, at St. Joseph’s University in Philadelphia.

Oh, look at that! That’s St. Joseph’s article is in The Hawk, the student newspaper.

I think, by the way, that full-time higher education journalists have done us some favors this week, not only by getting at the PSC-CUNY fracas above, but also by featuring some solid faculty vs. MOOC news, in an article by Ry Rivard, “Duke Faculty Says No,” in Inside Higher Ed, and “Saying No to MOOCs, at Least for Now,” bySteve Kolowich, in Chronicle of Higher Education.

That last article begins “The faculty of Duke University’s undergraduate college drew a line in the sand last week on online education,” which is pretty good, though I’d prefer to see a line like that in concrete.

I think that’s excellent higher ed journalism, and all the more so in light what we’ve had to deal with this morning in the New York Times. That would be Tamar Lewin’s front-page article, “Colleges Adapt Online Courses to Ease Burden for Students,” which begins with the following Tom-Friediqulous flourish:

Dazzled by the potential of free online college classes, educators are now turning to the gritty task of harnessing online materials to meet the toughest challenges in American higher education: giving more students access to college, and helping them graduate on time.

Dazzled educators: I’ve been waiting for somebody to really nail-by-naming the problem, and maybe this is it.

They’re dazzled. They can’t help themselves. They’re been shocked and awed. They can’t handle the real problem of higher education, which is the fact that the center of it—a confident and empowered faculty—has been shrunk down to about the size of Grover Norquist’s budget baby—nicely considered in this old Mother Jones column by Monika Bauerlein andClara Jeffery

Perhaps you will recall, this shrunken state is the one that will allow Grover to “rag it into the bathroom and drown it in the bathtub.”

In higher education, friends, that our baby that’s drowning—that is being drowned—but what ends up in front of most serious eyeballs this morning is dazzle-powder presented as serious medicine, provided and promoted by private corporations and pablum-peddling, turbo-philanthropic foundations.

Dazzle-ed: it’s all in the name of meeting tough challenges so that more students can access college graduate on time and get good jobs.

Technical term for this? Bullshit.

Think local. ByLaws set tone for and ultimately shape chapter or local governance. Do the guideline guide, define accountability, outline protections and responsibilities to all members ~ or codify a hierarchical stranglehold? Bad by-laws are all too often seen in the company of bad contracts. Joining up? Ask for and read by-laws and contracts

Phil Lillies is an internal auditor with a deep interest in workplace democracy. Based in Canada, he has spent ten years applying his training in philosophy and organizational development to the study of internal workings of labour and community organizations. In this article he focuses on bylaws — the rules and regulations that do so much to reflect and condition union culture at local level. He offers some reflections on how to write bylaws that will help create a democratic, inclusive organization… one that will inspire and empower its members to support good causes during times of quiet as well as times of struggle. This will prepare the union to better face the future, no matter what it may bring.